The Dallas Rangemaster Treble Booster is a booster guitar pedal that especially emphasizes the upper mid and treble frequencies (coloring the signal). It was designed in London (UK) by Dallas Musical Ltd in 1965.  At that time, the British tube amplifiers such as the Vox AC30 or Marshall JTM45, tended to produce a slightly dark, muddy tones when overdriven, this box fixed that issue. The effect became popular because of its sweet coloration, slightly bending the signal and giving a soft compression when maxed out.

The grey metal box was designed to sit on top of the amp and not on the floor as most of the pedals do nowadays, it features a simple ON/OFF sliding switch and a potentiometer to adjust the volume. The apparent simplicity of the circuit and the limited supply of this discontinued effect make it a perfect target for builder and guitar pedal enthusiasts.

The Dallas Rangemaster was designed with the available parts at that time (the 1960’s), carbon comp resistors, Mullard germanium transistor, no PCB (all the components are mounted over a piece of a terminal strip), an exotic English potentiometer, etc: 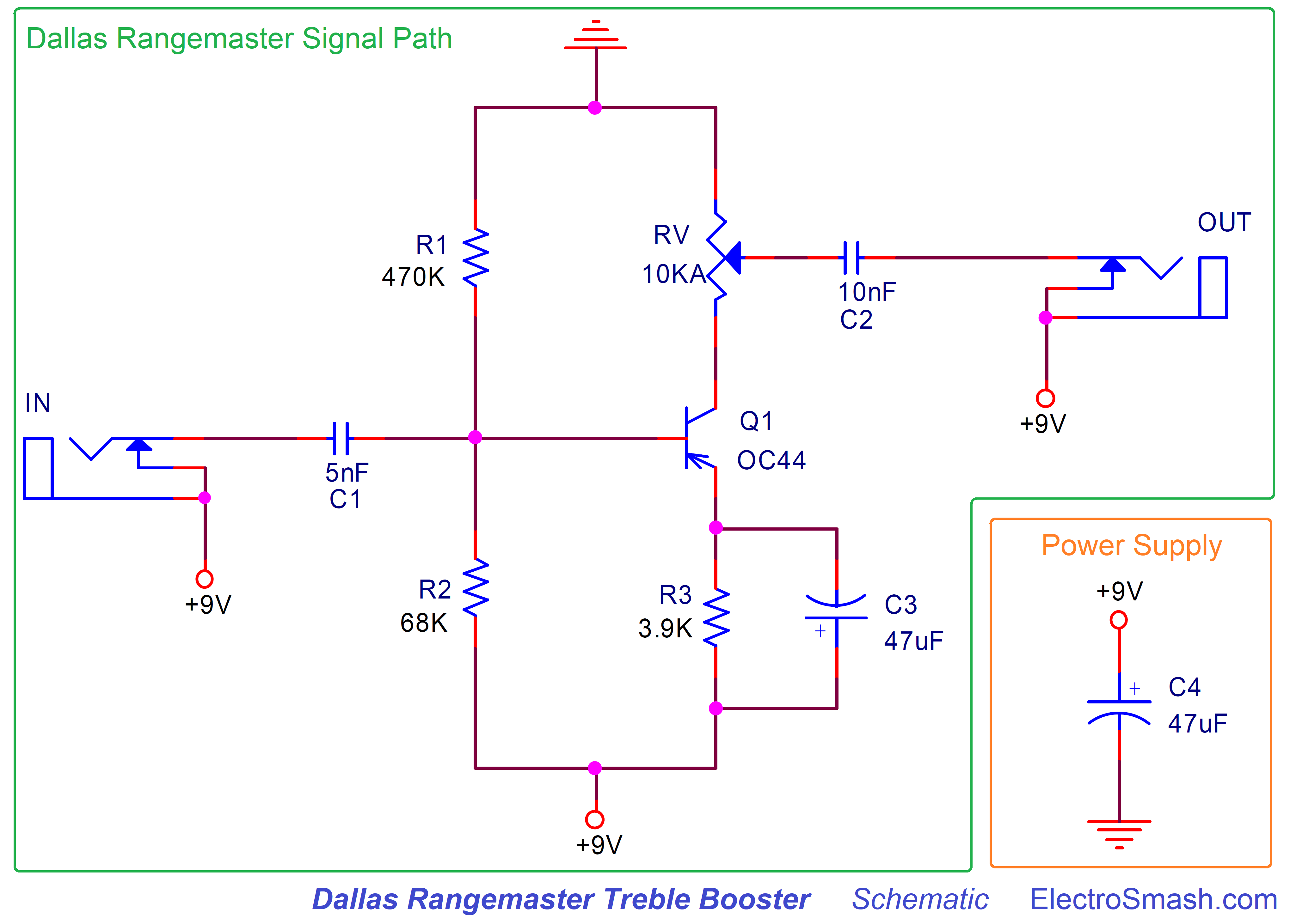 The input impedance could be calculated as:

β = 100, we are using this value by default in the whole article, you can do the numbers using any other value.

Ie= 0.2mA you can check how this is calculated in the biasing section.

The “//” symbol means “resistors in parallel”.

As a rule of thumb, a high input impedance (around 1MΩ) is always desired; it reduces tone sucking, pickups loading and possible interactions/interference between pedals.

12KΩ is a poor input impedance value (Zin), but part of the Rangemaster sound owes its fame due to the way its low Zin interacts with passive pickups. This loading will smooth the highs and helps the guitar volume control the clean it up. So, the input impedance is an important factor on the pedal’s tone, if the effect is not driven by a guitar but by a high input impedance buffer, the Rangemaster may sound bright and thin. This is why many people like to place this effect the first in the pedalboard (or keeping it in an isolated loop)

Ideally, a guitar pedal design aims for low output impedance, it makes the circuit to interact nicely with the rest of the pedals on the board. 10K is not bad; most of the designs keep the output impedance below 1K but 10K is still good.

The C3 cap that bypasses the R3 resistor makes the voltage gain formula:

Note: The DC Voltage across the Volume control: The electronic design of this pedal makes that the RV potentiometer keeps a DC voltage across its terminals. This means that the sound will scratch and whenever the volume is touched (even if you use the original plastic- non-conductive original discontinued Wilk potentiometers)

The maximum swing operating point in the Rangemaster happens when Vb=7V approx. and Vc=4V approx. But as you will see in the Bias Section, the considered best sounding biasing happens with  Vb=8V approx. and Vc=2V approx. The transistor amplifier is not at the center of the linear region, and it will result in an asymmetric soft clipping:

The most important filter for the audio response is C1, attenuating the harmonics below 2.6KHz and giving full gain to the treble.

The magic of this equalization is that frequencies over 2.6KHz will have full gain and a soft clipping when the strings are strummed hard. Giving some warm tone to the high frequencies.

Germanium transistors have an Hfe (also called β and Gain) value that changes from part to part. As a result of that the bias point of the pedal will change from one unit to another, to fix that and try to make the best sound out of the pedal we have two options:

It is commonly agreed that the ideal bias point for the Dallas Rangemaster Treble Booster is to have Q1 collector voltage at -7.0V (any value between -6.9 and -7.1 would be great), if you refer the voltage to ground and not to +9V (like the image below) the perfect Vc=+2V ( any value between 1.9 and 2.1).

The easiest way to achieve the best sounding bias is to substitute the 69KΩ R2 by a 100KΩ or 200KΩ trimmer resistor (a Bourns multiturn resistor is expensive but the best part for this task): 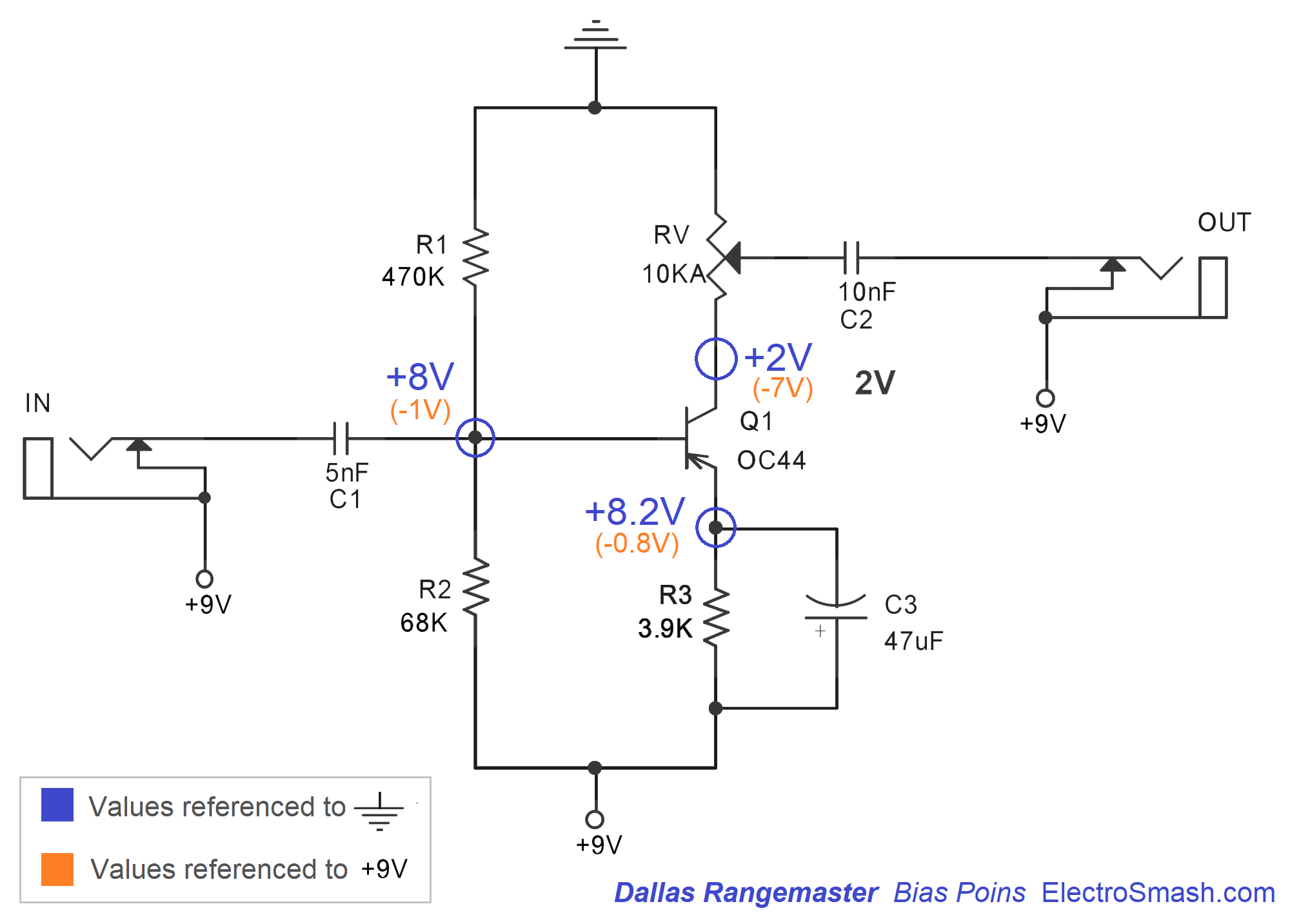 Calculating the Base voltage:

The Base voltage (defined by R1 and R2) will determine the Base current:

The collector current and Collector Voltage will be:

It is important to understand, that following the equation, if the β value changes, the bias point will change too. This is why using a trimmer resistor instead of R2 will compensate for this β variation.

4.1 Effects of the Bias Point over the Output Signal.

The bias point has a direct effect over the output waveform shape and the sound of the Rangemaster. In the image below you can see the output signal with different Vb values when the Volume knob is maxed out:

You can see how the default configuration (Vbase=8V) is not the cleanest option. Setting a Vb=6.8V (7V approx.), like the light green trace will give us more headroom and clean sound. But part of the character and mojo of this pedal remains on its biasing.

note: For all these graphs we have used a Q1 transistor with gain = 100.

The simplicity of the circuit makes builders experiment adding some extra features so players can have some more knobs and switches to play with.

There are 4 ways to ground the Rangemaster circuit:

The Dallas Rangemaster Input Cap modification is the most popular one. By simply changing the C1 input cap we can transform the frequency response making it more limited or wide. It is easy to implement, just using an ON-OFF-ON SW1 switch. There are two typical sets of cap values (5/10/15nF and 5/47/100nF) that you can use for this mod:

This modification is not as popular as the Input Cap Mod and for a reason. Although it has to be admitted that 10nF is a low value for an output cap (many pedals use caps in the 100nF to 47uF range for this). Changing the C3 value will modify the filter created by this cap and the “load” or next pedal/amplifier in the chain. Users have different setups or “loads” so the result is variable.

In the same way, as in the Input Cap Mod, this feature could be implemented by using an ON-OFF-ON switch to change between 1nF, 10nF (standard value), 1uF. But if you have a good load (around 100KΩ to 1MΩ) the cut-off filter frequency (fc=1/2piRC) will not affect the audio band.

5.4 Input Pull-Down Resistor: The original Rangemaster was designed to be used between the guitar and the amp, with no other effects around. If you plan to use it together with other effects is recommended to use a pull-down input resistor (anything between 1MΩ – 10MΩ) to avoid the input cap to pop when activated.

5.6 Bias the Rangemaster with a 100KΩ potentiometer instead of fixed 68KΩ R2:

A 100KΩ or even a 200KΩ potentiometer (Burns multiturn resistors are great for this task) can be used to adjust the bias point and make the pedal to sound its best. By using it we can fix the problems with low gain germanium transistors and adjust the Vb to the optimal +8V. You can get more info about this is the Bias Section. 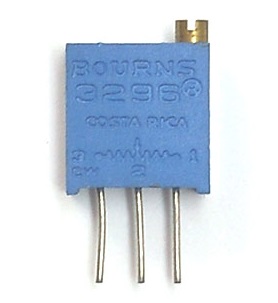 My sincere appreciation to J. Blake Arnold for your help with this analysis.

Thanks for reading, all feedback is appreciated: info@electrosmash.com