Posted on February 11, 2020 by HardWired
This DIY modular synth system is very much in the “Luneta” style. Stanley Lunetta was a man I never met but who seems cool and was really interested in abusing CMOS logic chips to make sounds from them. It turns out this is a really great way to have a lot of fun making a horrible racket without spending much money. If you want 1V/Octave tracking, tempwrature compensation and other things that make tonal music possible, you are going to be disappointed. If you want to make sounds like a dying cyborg trapped in a meat grinder then you are in the right place!

Every article contains a schematic, a perfboard layout, a drill template for a eurorack sized panel, as well as an explanation and analysis of the circuit. The explanation is a more general overview of the circuit, while analysis is generally a deeper investigation involving calculations. You don’t need to know the maths! Ignore it if you don’t care! There’s also a warts-and-all admission of mistakes I made so that you don’t have to repeat them. Honesty is the best policy. DIY includes lots of messing up. Everything runs off a simple 9-12V DC wall-wart type adaptor, and outputs signals that range from 0-5V.

Though I have designed these to be beginner friendly, I reccomend you first know how to read a schematic and how to lay out and build something on perfboard as well as on a breadboard. Neither of these are tough though, so don’t worry! You can also definitely use these projects to learn about all of those things, but ultra-simple projects to get your feet wet might make things go smoother. Don’t expect everything to go right the first time. Hunting down your mistakes is part of the fun! Have patience!

The only module you will use 100% of the time. It’s slightly dishonest to call it a power supply though, as really you use a DC wall-wart as the power supply, this is just a switch, an LED and a bus board.

There is also a general overview of the system, including the colour scheme for the banana jacks and what the general ethos of this DIY project is. 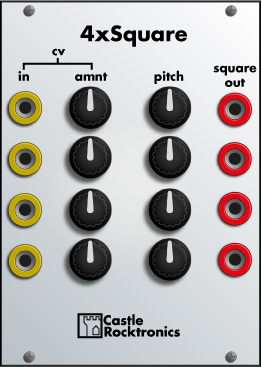 You can’t have a synth, modular or otherwise, without oscillators! But why have one when you can have four? This is a slight twist on popular 40106 oscilator bank, with very simple CV control of the oscillators added with diodes. Very low parts count, a nice easy build.

In the article we cover why it oscillates, as well as why the diode allows for pitch control and gating. On top of that, we figure out how to calculate the pitch of the oscillators and how to figure out where the gating effect of the diode kicks in.
Your browser does not support the element. Sorry!

One oscillator being modulated by another 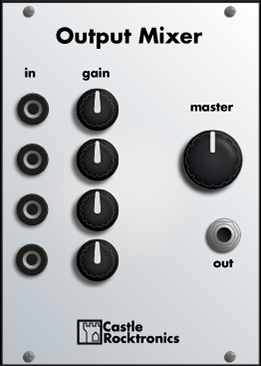 The other thing you can’t not have is some way to get the sounds together on one cable and out to an amp or your computer. That’s exactly what this module is for, with a little added extra: built in overdrive! 4 channels that are summed together and stepped down to line-level so you don’t blow anything up & smooth, but gritty overdrive for when you want to get aggressive. Very nice when you have pulsing ambient drones going on.

In the article we cover op-amps as inverting amplifiers (and summing amplifiers), using op-amps on a single-rail power supply as well as decibels and how diodes in an op-amp’s feedback loop create clipping.
Your browser does not support the element. Sorry!

Some drones driving the inputs hard to bring out the overdrive.

Four square wave LFOs with little blinky lights to show you how fast they are going. Endless fun. Just don’t stare into them too long or you will hurt your eyes.

This article is very short as the insides of this module are just the same as 001 – 4xSQUARE, only with bigger capacitors. However, I ran into a few problems while making it, which I write about briefly, mainly to do with drilling and measuring out panels – both of which I ballsed up terribly…

Two deceptively powerful and useful little tools tucked in nice and tight on a small panel. Chain them together for a larger 8-bit register!

The article covers what shift registers actually are, a tiny sampling of their many uses and a look into a circuit building block that we’ll be getting very familiar with – the leading edge detector. There is also what I hope will be the last of my woes from working with acrylic for the front panel.

R-2R is two “R-2R ladders” in a tight 6HP package. The four inputs act as a 4-bit digital-to-analogue converter that is perfect for generating stepped waveforms to drive oscillators as a CV source or to create more interesting sounds than the raw squarewaves everything has been putting out till now. It is basically a Digital-to-Analog converter

The article gets really tucked into DC analysis as we pick apart how and why the R-2R ladder works. You will be sick of Ohm’s law by the end of it, but you should also never have to read up about it again!
Your browser does not support the element. Sorry!

Another simple double dose module, pretty much just a chip wired up to jacks and LEDs. It is a very useful chip though: the 74HC393. This little guy has two “binary ripple counters” which are sometimes also called frequency dividers.

The article is a brief one, but we talk a bit about the history of the 7400 and 4000 series logic families and some of the things you can use your divider for.

Divider outputs into R-2R, which drives an oscillator for arpeggio-esque patterns. That oscillator is then run through the other divider for a fat 8-bit bass sound.