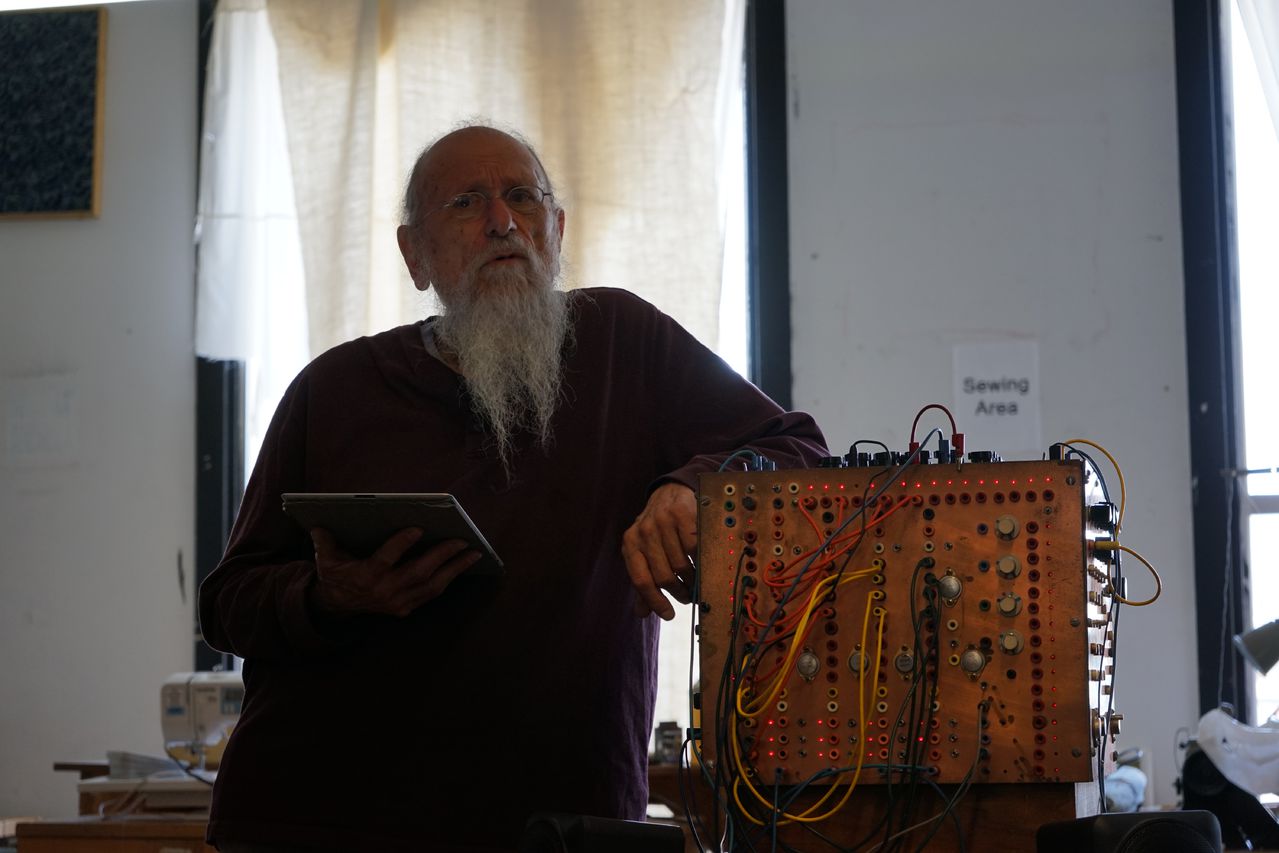 LM: So the Moosack machine was dismantled in 1970?

SL: that’s right. Since then I’ve continued to build more Machines, based on the Moosack Machines. In fact, I tend to call them all Moosack machines just because I think it’s a nice name. some of them are meant to be performance Machines, in other words a synthesizer, and others are meant to be self-contained compositions that you don’t perform on, you must turn them on and they play.

The performance Machine started out as a simple combination of pieces of equipment that I had built, and as I started adding more to it, it became more or less an integrated system. It’s a digital music-making Machine. It makes as many as sixteen polyphonic lines, or you can have keyboard-activated things form it. It has its own memory system, so you can either set it to play or you can set it to do things on its own, or you can perform on it as a performer. It makes live electronic music, right there.

LM: Is this the only machine that can achieve this much complexity in real time?

SL: I don’t think so, but I haven’t worked with a large Moog system in a long time. What my machine has is sixteen separate voices. Of those sixteen separate parts, eight of them have a choice of eight separate voices. So there are sixteen voices, eight of which are the same voice doing whatever it does, and each of the other eight have a choice of one of eight voices.And the choice changes all the time. Like on channels 1 through 8 you might get sounds S through Z, but you might get sound S on three of the channels and Y on one and X on the other, and the next second you’d have sound V and W coming through all of them.

LM: How are the sounds generated?

LM: so you don’t mind how mathematical that all is?

As far as electronic music is concerned, my way of doing it is based on the fact that I have to make the instruments to be able to do the music. I can’t conceive of working on a Buchla or a Moog or an ARP, even though they have capabilities that my instrument doesn’t have. Mine also has capabilities that theirs don’t have. I doubt if the others have a four minute sixteen second glissando.

LM: Back in 1973 I heard the piece you did with the Sacramento Symphony called “The Unseen Force.” I understand you got a National Endowment for the Arts grant to finish the piece in 1975. How did the piece come about?

SL: I was the tympanist for the Sacramento Symphony from 1963 to last year. One day in 1972, the conductor, Harry Newstone, commissioned a piece from me. No, you either write a piece because you have suddenly a strong desire to write a certain piece, or else someone asks you to write a piece, and you start thinking how you’re going to do it. In the case of this one, I couldn’t get started for a long time. And then one day I was sitting in my studio at home and I thought “Oh boy, this is really awful.” I’d started several orchestra pieces by then, and they were all stinko, and then one of my friends said, “Why don’t you just turn the Machine on and let it play, and then transcribe that for orchestra?”

So we had a couple of yuks over that, and then I thought, “Well, what the hell, I’ll turn the Machine on and see what it’s playing right now.” I had patched this in and that in, and I didn’t know what I had it set up at. So I put it on, and it was playing something real simple on one of the voices, a little binary-encoded sixteen note melody, and it was sort of cute.

So I transcribed that, and then I made a similar hookup on another part of the Machine and it got a second melody, and I thought,”Gee, these are both really nice,” and they each had similar chord progressions, one in the key of D and one sort of in the key of D.

so those melodies became the end of the composition. Then I wrote the rest of the piece backward in time from the ending which the Machine had written, so that the whole orchestra piece is sort of an obscure sent of variations on a theme written by a machine.

LM: do you put the Machine in improvising situations with live musicians?

SL: Sure. I intended the Machine to be used as a live performance type of instrument. so I formed a group called Amra Arma, which we call a “hyborean” performance group. It consists of four drummers, one keyboard-reed instrument, one bass player, and the electronic Machine. I’m one of the drummers, and I get the electronic machine going, but it mainly plays on its own. The group takes its musical impetus from what the machine does.

LM:When the group plays, does the machine decide what they’re going to play?

SL: We have developed a series of ways that we work. One is to have the group accompany whatever the Machine does. We do a piece we call our “ritual piece,” where I set the Machine up in advance to some setting, then I go through a sort of ritual with the Machine where I work with what it has and try to produce a sort of joint composition with it and myself. Then the other members of the group, once they find what direction I have gone, respond to the Machine, and the Machine through me responds to them, and we get a whole piece. Other times we have the Machine do specific things to go with specific things that the other musicians play. Then at times I adjust the Machine so that it is sensitive to sound that it hears, so that when the drummers play, the Machine accompanies them. So we run the whole gamut, from the live musicians responding to the Machine to the Machine responding to the live musicians, and all the in between areas.

LM: Do you feel you’re expressing yourself through the Machine?

LM: How does your self relate to a machine?

SL: Hmmm. I don’t know. I’d like to be a cyborg. I built a series of helmets for Amra Arma. When we perform we do a whole rite. It doesn’t make sense for Amra Arma to perform music as music, because what we do is concerned with more than just music. Consequently we don’t walk out and bow and wear tuxedos. There are some costumes, lighting, a fog machine–it’s like some sort of a weird modernistic pagan rite. So to walk out and play an electronic music machine would make no sense at all. So my performance attire is integral with what it does. I couldn’t perform in any other way. The original helmet looked something like a welder’s mask, with lights on it and controls that went to the machine. The second helmet was more elaborate. It has tongue-activated keyboards inside. It’s a whole different approach to performing. Instead of standing in front of the Machine like a scientist, I’m more like a priest calling on some sort of weird deity.

LM: last September you had a big show of your Sound Sculpture at the Crocker Museum. Could you describe some of the other Moosack machines you’ve made?

SL: Sure. The Sound Hat is one of the more fun-provoking ones. It’s an Abe Lincoln hat, a little bit bigger, and it’s got its own speaker and amplifier built in, battery operated. It’s got a little logic system, and oscillators and octave dividers and modulators, which are run by the logic system. The logic system gets its controls from the presence of light and the tilt of the hat, so if it tilts a certain way and the light shines on it, you get a certain set of sounds. So in effect it’s a mini-mini-computer that’s programmed by its tilt and the amount of light.

I made a typewriter, which is a computer teletype keyboard, and I use it for several things. first of all, I use it to program memories for my performance Machine. Secondly, you can plug it directly into the performance machine and use it as a keyboard. Instead of a piano keyboard it’s a typewriter keyboard, and it’s really fun to play. And third, I built into it a little logic system with oscillator and amplifier speaker, so that it’s just the size of a small typewriter, and you can take it someplace and plug it in and play compositions on it. you can play names, you don’t even have to be able to type to play it, and it’s got a simple sound system to play melodies.

then there’s the Morthtar-Mat. I call my Chevrolet van a Morthtar. I built a system that’s connected to the turn signals, the speedometer, the photoresistors, the doors, the lights, and everything. As you drive you get a composition based on what the car is doing. I used that when I went to North Shore Lake Tahoe to accompany Elvis Presley and Ann-Margaret.

Now I’m building an obelisk, which will be sort of a big performance machine/art object, somewhat like the Transamerica Building in shape. As an art work you’ll put it on a particular setting and it’s responsive to its environment. It has telephone inputs, altimeters, barometers, radio inputs, sensors for heat and wind direction, all that sort of thing.

LM: When the obelisk was at the Crocker, could the audience program what it played?

SL: When the obelisk is playing, the audience isn’t able to overtly change it, but their presence has a lot to do with it. If the environment is too noisy, it makes softer sounds. Alvin Lucier had an idea of a piece where you’d make music that would improve the environment. If the environment was full of loud obnoxious sounds, it would take those sounds and make them more pleasant to your ear, by either softening them or playing around them so that they wouldn’t be so loud and obnoxious. The concept of the obelsik is that if there are loud obnoxious sounds around it like people talking loud or shouting, it plays loud enough to cover these and then trough some program gradually diminuendo down to making pretty sounds, hopefully bringing the people along with it.

Its environmental responses and telephone hookup mean that if it’s playing in, say, Denver, I can put on the helmet I use to interface with it, call it on the telephone, and respond to the people there through it.

The nicest thing that’s happened with electronics is that I can make the music I want to make without having to make it be a commercial success. I can sit down in my studio and make the sounds I want–it’s almost incestuous. But on the other hand it’s enabling me to think very clearly about how I want my music to be. The ultimate personification of my ideas is the obelisk–it goes out and plays and I don’t have to go to rehearsals anymore. Because the making of the Machine is really enjoyable, and when it’s all made and it has all of its possibilities, then I can just take it places and have it play. 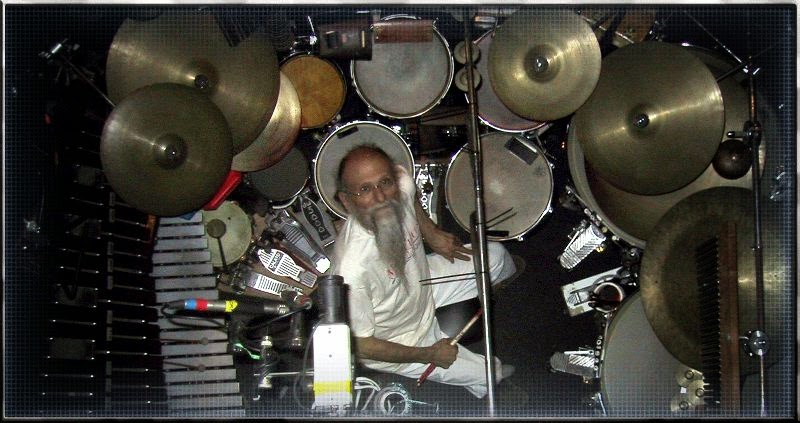 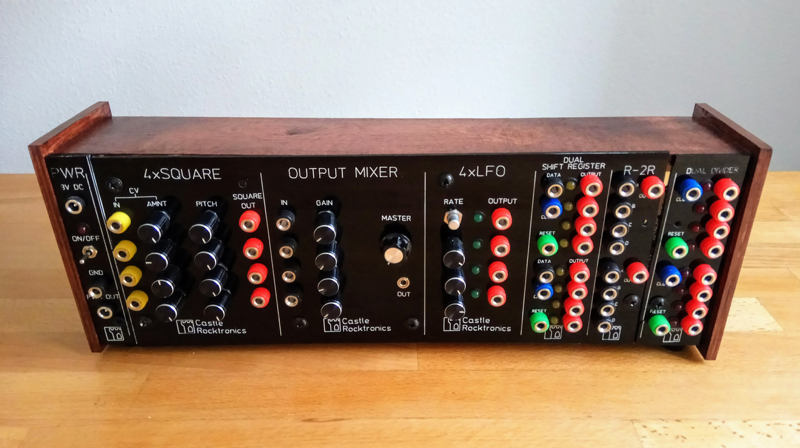 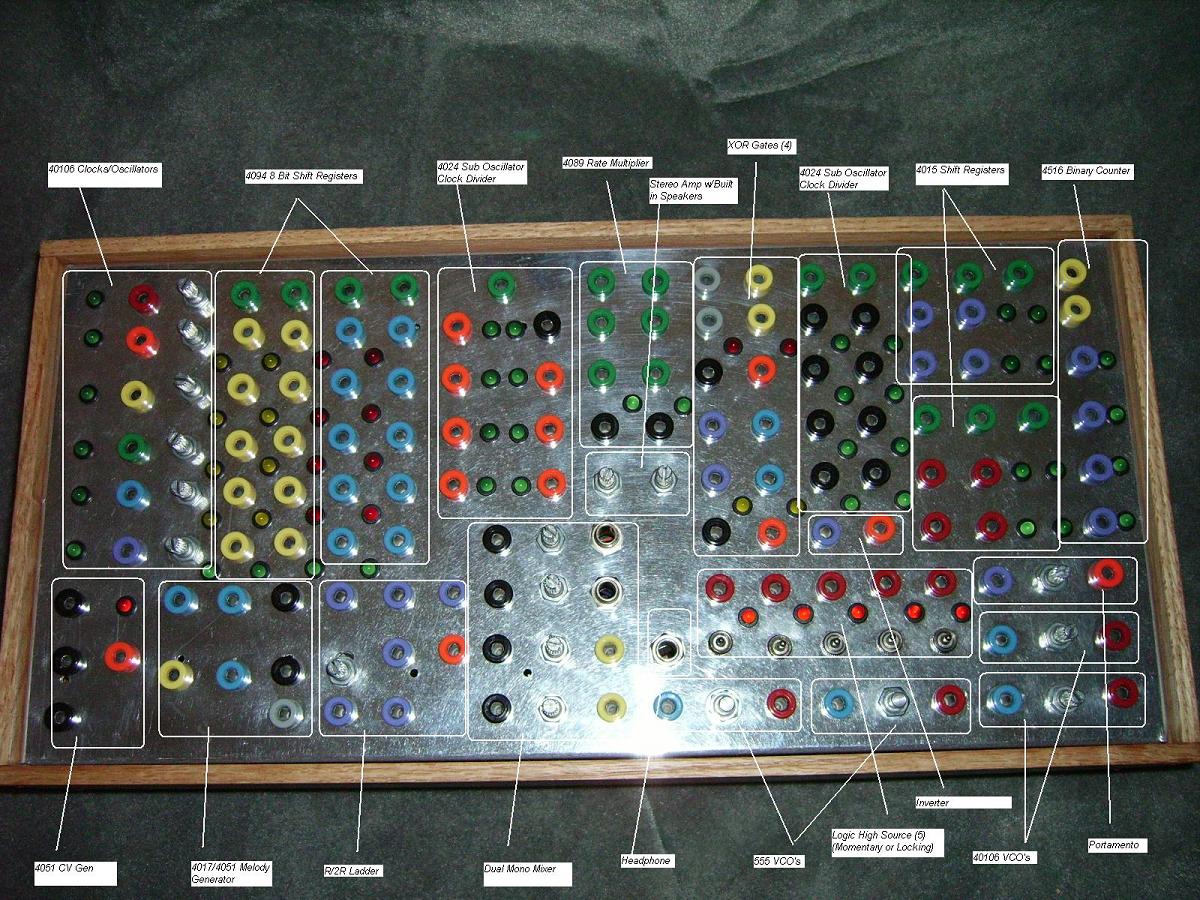