One of the earliest treble boosters was the Dallas Rangemaster. Unlike most of today’s clones, the original Rangemaster was not a pedal, but a box meant to be placed on top of the amplifier. The circuit makes use of a single OC71 or OC44 germanium transistor.

The Rangemaster has also been used extensively by Brian May, Tony Iommi, Marc Bolan, and Rory Gallagher. Tony Iommi’s Rangemaster was modified to be full-range.

There are a gazillion treble boosters out there now so plenty to choose from. I have no idea on the specific mods done to Tony’s Rangemaster but those early Sabbath albums are full of some of my favourite guitar tones of all time

.01 uF for the input cap – that seems to be Sabbath-Sound tonewise

Create full range blend pot in a Rangemaster type circuit, like in the Easy Face schematic: LINK. The input wire goes to the 100k lin pot. Use 4n7 for the treble cap and something like 1uF or even 2.2uF (.01 uF) for the bassy cap and you’re done! You can now dial in anything from the standard treble boost to a mid boost, full boost and even bass boost.

Iommi wasn’t a huge effects guy in the early days, but he did use a couple of key items to achieve his signature tone. In addition to cranking the mids and high-end on his Laney amps, he also hit the front of them with a Rangemaster treble booster for more overdrive and punch. The result was a fat, fuzz-like tone that is often mistaken for a Big Muff or some other pedal. It is, in fact, just a treble booster and a big-ass tube amp set on “destroy”. Modern guitarists also tend to forget that Iommi’s sound was not a high-gain one. Even with the Rangemaster, his tone was quite clean by modern metal standards. 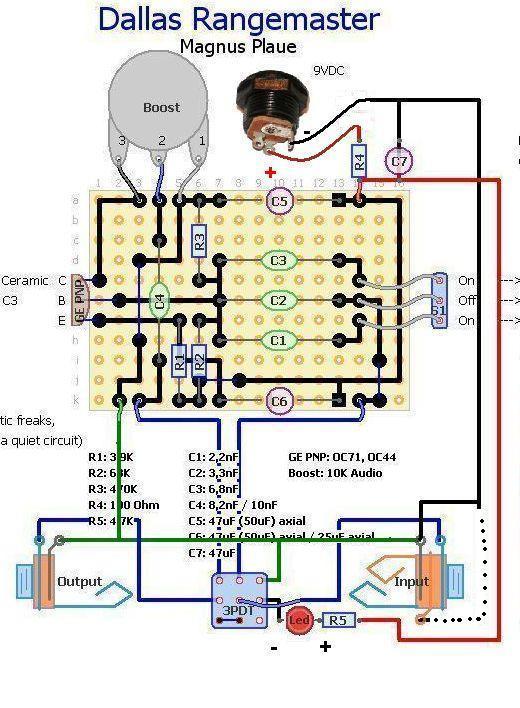