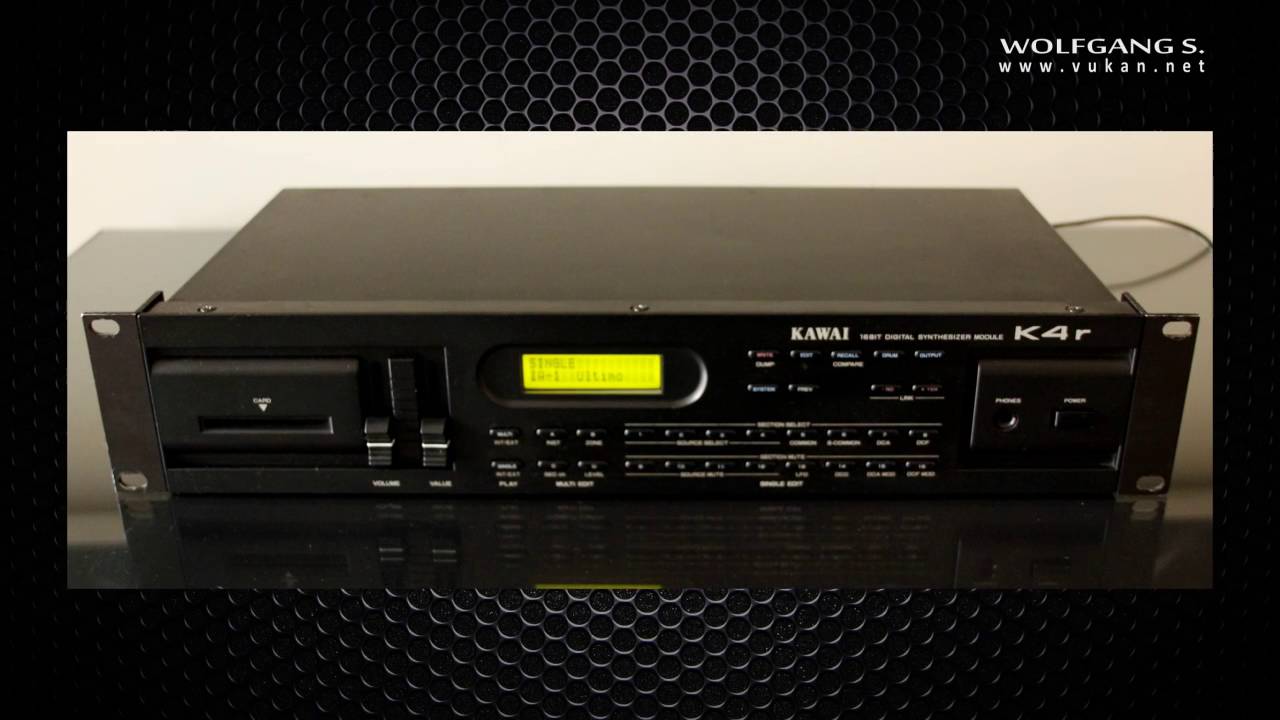 This revolutionary new synthesizer uses 16-bit sampled and synthesized waveforms for optimum sound quality. The friendly user-interface and parameter structure of the Kawai K series has been retained, and new functions and features added to increase the K4r is music making power.

The K4 is a 61 key touch-sensitive synthesizer equipped with a DMS (Digital Multi Spectrum) tone generator capable of up to 16 notes of polyphony when set at two Sources per tone. The K4r is a 19 inch, 2U rack-mount module version.

The K4/K4r has 96 CD (Digital Cyclic) waveforms composed of as many as 128 harmonics, and a total of 160 PCM waveforms, for a total of 256 waveforms. Because the K4/K4r’s internal waveforms are reproduced using 16-bit quantization, noise and distortion are virtually inaudible.

The K4/K4r has its own DRUM Section which can be controlled independently of SINGLE Patches or the eight Sections of a MULTI Patch. The 61 keys from C1-C6 on the keyboard may be assigned freely to produce these tones.

The K4 has 16 types of internal effects, including Reverb, Delay and Overdrive, etc.. In MULTI PLAY, the depth of the effect may be set for each tone.

The K4/K4r has the feeling of an acousic piano keyboard, a feature which has made the Kawai K series so popular. In addition, Velocity, Aftertouch, Release Velocity and Keyboard Scaling features allow the expression of the most minute touch on the keyboard.

Eight SINGLE tones may be reproduced by the DMS tone generator, freely combining the Layer, Velocity Switch and Split functions, enabling far more beautiful layered and split sounds than have ever been possible before.

In the MULTI PLAY mode, each tone may be set to a specific MIDI channel, allowing the K4/K4r to function as though it were eight MIDI tone generators (or nine with the DRUM Section). The Variable Multi-Timbral function also allows the voices of each Section to be played simultaneously.

The K4r is equipped not only with two stereo output jacks, but with six separate output jacks as well to allow the connection of external effects units to create high quality sound.

Eight patches from those in the unit may be selected and stored together. This function is used, for instance, when multiple tones are to be used in sequence. When arranged in the order in which they are to be called up, the operator may easily change tones from one to the next while playing.

A card permits an increased number of tones to be placed in memory. One card can hold 64 SINGLE Patches, 64 MULTI Patches, the DRUM Section and EFFECT or OUTPUT Settings.